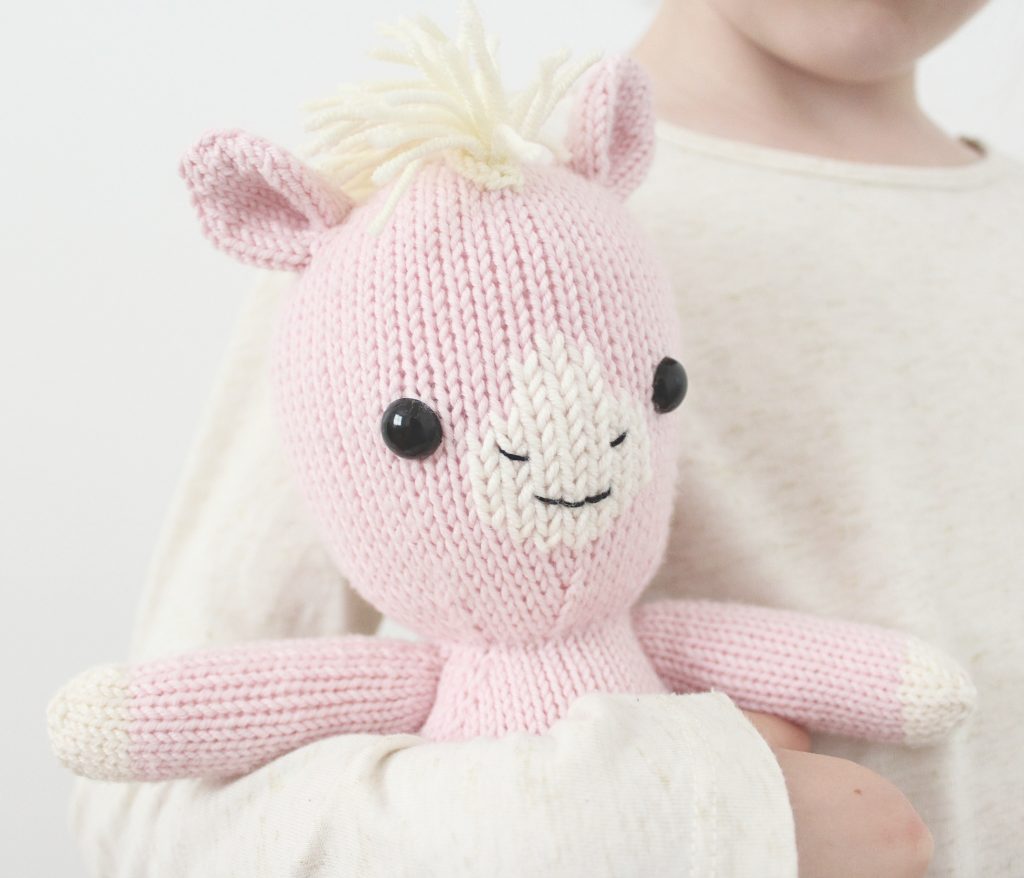 What is it about growing up and wanting a pony so bad during your childhood? They seem to be just the cutest stable animal without the full commitment of a horse (which is obviously not the case) So instead of purchasing this type of animal as a pet (go for it if you want!) here,s a great substitution – knit your very own! This amigurumi doll is just the cutest take on what a Pony doll could like like and seems like the type of stuffed animal that you could grow up with. For many kids, I think this doll would suffice.

If you follow knotbadami.com, Vincent and another crafter talk about the difference of a crochet and knitted amigurumi doll on a BluPrint series. Most of the time, when you think of amugurumi, you think crochet. However, Hello.Dolly.Knitting is changing our minds here on Yarn Punk. Add this to the points for knitting! Lets hand it over to Emily!

I’m Emily. I’m a wife to a wonderful husband, home school mum to two beautiful little girls and the owner of a Great Dane puppy named Clancy. I enjoy my life with my little family on the beautiful south coast of Australia. Autumn and Winter are my favorite seasons, where I can snuggle up with my knitting and a cup of coffee.

Want your pattern to be featured on Yarn Punk? Click Here to Find More Info

Pin Me For Later! 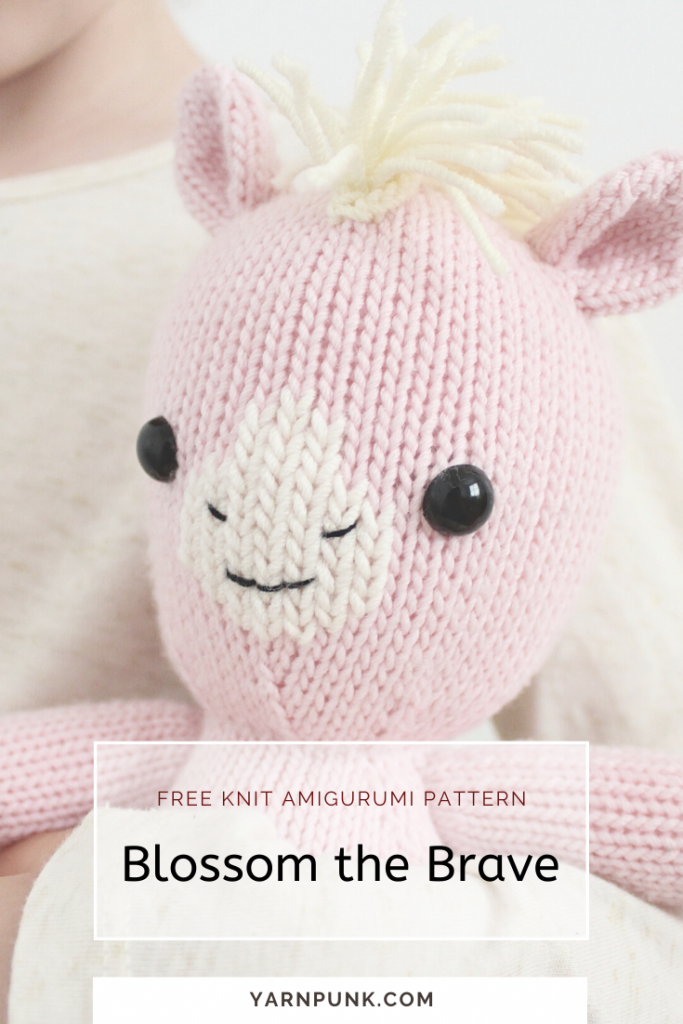 I am so excited to be able to share this super cute pony pattern here on Yarn Punk! The name of this pony has a little story that goes with it. I originally knitted this pony design for a friend of my youngest daughter, who had just had surgery. My daughter’s friend ask if it had a name. At this stage I hadn’t come up with anything yet and I told her she could name it. Well my heart absolutely melted when her Mum told me she had named her Blossom the Brave, and that she would take her horsie everywhere to help her always feel brave! So here is the Blossom the Brave knitting pattern and I really hope this little horsie is able to help other children feel brave too!

This toy has been designed at a tension of 6.5 sts to 2.5 cm/ 1 inch. Stuffed toys are generally knitted with needles smaller than the recommended needle size for your yarn, for a tighter knit. This is to prevent seeing any filling through the toy.

Be sure to tag @knot.bad and @yarnpunk on your socials and use the hashtag #yarnpunk!

Using MC yarn for the body, and 3.25 mm dpns, cast on 8 sts using a circular cast on method. You can read my tutorial on how to circular cast on https://www.hellodollyknitting.com/how-to-circular-cast-on-for-knitting/. Knit into the back leg of the first yo st, then knit to the end. Divide the sts roughly equally over 3 dpns. Join in the rnd and knit as follows:

Round3: Knit (and every foll alt rnd).

Before shaping the neck, remove the markers and position the safety eyes. If placed correctly there will be 9 sts in between the eyes. This is important when adding the muzzle, refer to the graph on page 4. Once the eyes are in the correct position fasten them in place. You’ll need to stuff and shape the toy as you knit. See pattern notes for tips on stuffing. 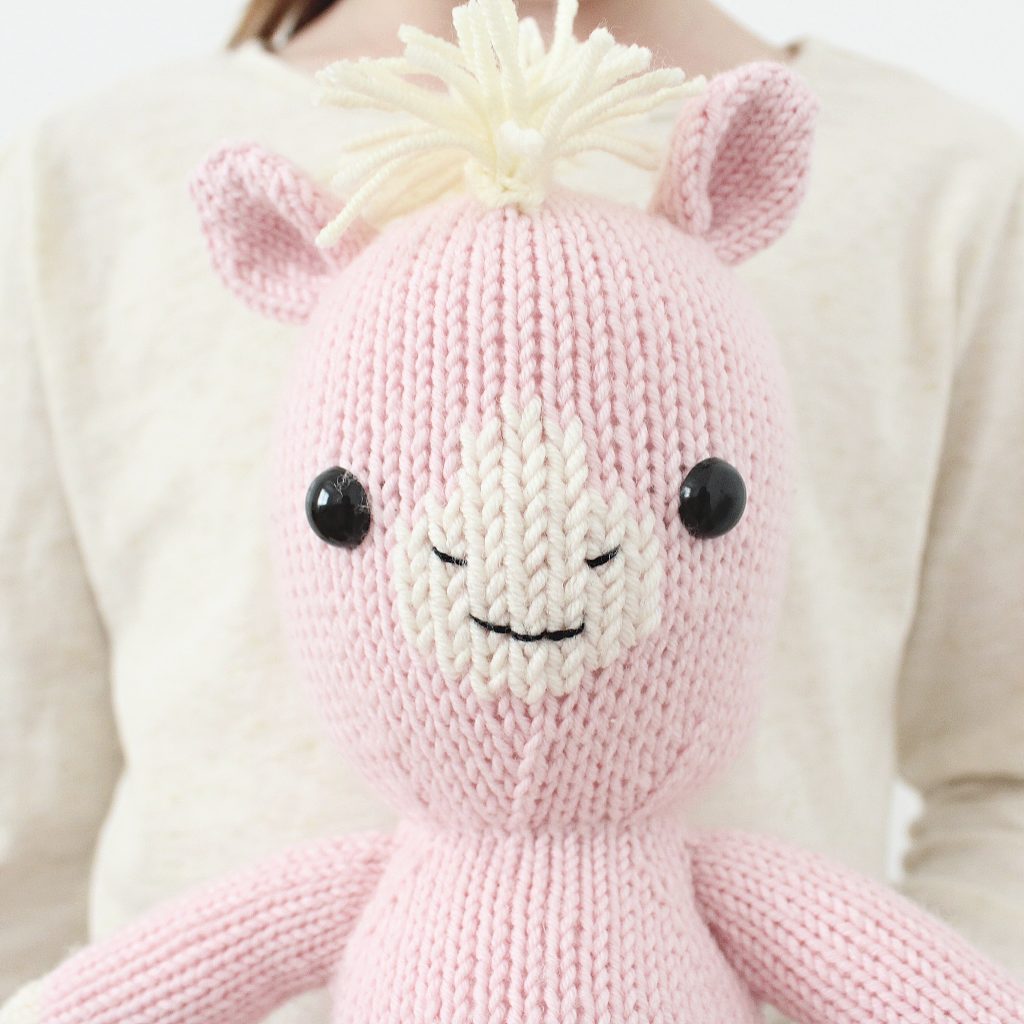 Using a yarn needle and yarn in CC, follow the chart below and stitch the muzzle to the pony’s face using duplicate stitch. You can follow my duplicate stitch video tutorial at https://www.hellodollyknitting.com/duplicate-stitch-knitting/. 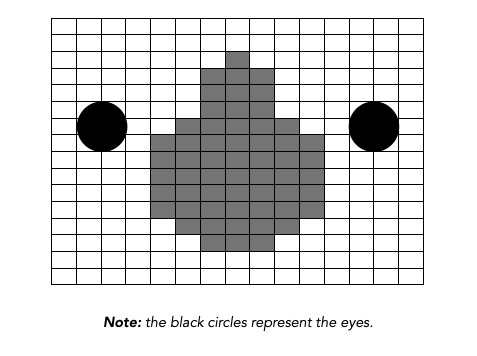 Once finished stitching the muzzle, use a sewing needle and black embroidery thread to stitch the pony’s mouth and nostrils. Refer to the opening image as a guide.

The body of the doll is picked up and knitted directly from the head and is then knitted in the round. Holding the head up side down, starting at the marker placed for the body, use a 3 mm crochet hook and yarn for the doll’s body, to pick up 32 sts in a clockwise direction along the entire round. Be careful to only pick up the stitches from the same round.

Tip: When picking up the stitches, insert you crochet hook under both legs of the stitch as though you are looking at an upside down ‘V’ as this will make the join appear to be seamless. I’ve designed the doll in this way to give the neck extra support.

Place the sts over dpns as you go. (8 sts on each of four 3.25 mm needles). You can read my tutorial on how to pick up stitches for toy limbs at https://www.hellodollyknitting.com/how-to-pick-up-stitches-for-seamless-toy-limbs/. Join in the round and knit as follows:

Round5: Knit (and every foll alt rnd).

ARMS (Repeat on each side)

The arms of the doll are picked up and knitted directly from the side of the body, below the neck, and are then knitted in the round. The stitches for the arms are picked up in the shape of a square. Refer to diagram below on where to start the round, as this will affect the orientation of the hands. With the side of the doll facing upright, working in a clockwise direction, use a 3 mm crochet hook & MC yarn, to pick up 16 sts in a square (4 sts on each of four 3.25 mm needles). Join work in the round and knit as follows:

Change to CC and knit as follows:

Finish stuffing the arm. Once you are happy with how the arm is stuffed, divide rem 8 sts equally over 2 dpns (4 sts on each needle), so the needles are parallel with the front and back of the hands. Next, graft the rem 8 sts together. 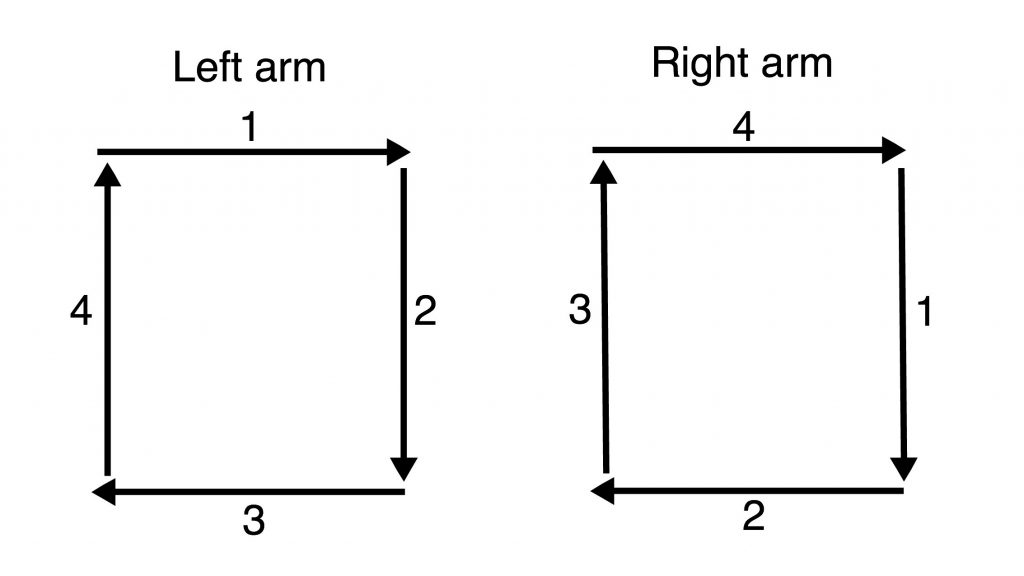 LEGS (Repeat on each side)

In the same way as before with the arms, working in a clockwise direction, use a 3 mm crochet hook & MC yarn, to pick up 20 sts in the shape of a square (5 sts on each of four 3.25 mm needles). This time though, it won’t matter where you start the round, so long as you work in a clockwise direction you can start the round where you prefer. The legs are placed at the front of the body and should sit just above the decreases for the bottom. I’ve spaced my pony’s legs about 3 sts apart. Join work in the round and knit as follows:

Change to CC and knit as follows:

Do not stuff the ears. Divide rem 6 sts equally over 2 dpns (3 sts on each needle), so the needles are parallel with the front and back of the ears. Next, graft the rem 6 sts together.

Fasten, then bury all ends inside the pony. Using a 3 mm crochet hook & yarn for the mane, crochet the mane using loop stitch, (See page 2). Crochet the mane down the back of the head, then cont the loop stitch in a clockwise direction, back up to the start again, so you have two rows of loop stitch for a healthy looking mane. Join with a slip stitch into the first stitch to close the mane. Next, cut the loops of the mane and trim.

Using the tail ends of the ears, stitch the ears to the top of the head, either side of the pony’s mane, with the ears slightly folded as pictured. Secure and bury the tail ends inside the toy.

This is optional, but you might like to stitch the arms to the side of the body to stop them from sticking out too much. Secure and bury the tail ends inside the body.

Finally, add the tail by cutting at least 15 lengths of yarn, double the length you want the tail to be, plus extra for knotting and trimming. With a crochet hook, pull all the strands through the bottom of the pony so the strands double over. Tie off the strands at the base of the tail and trim. 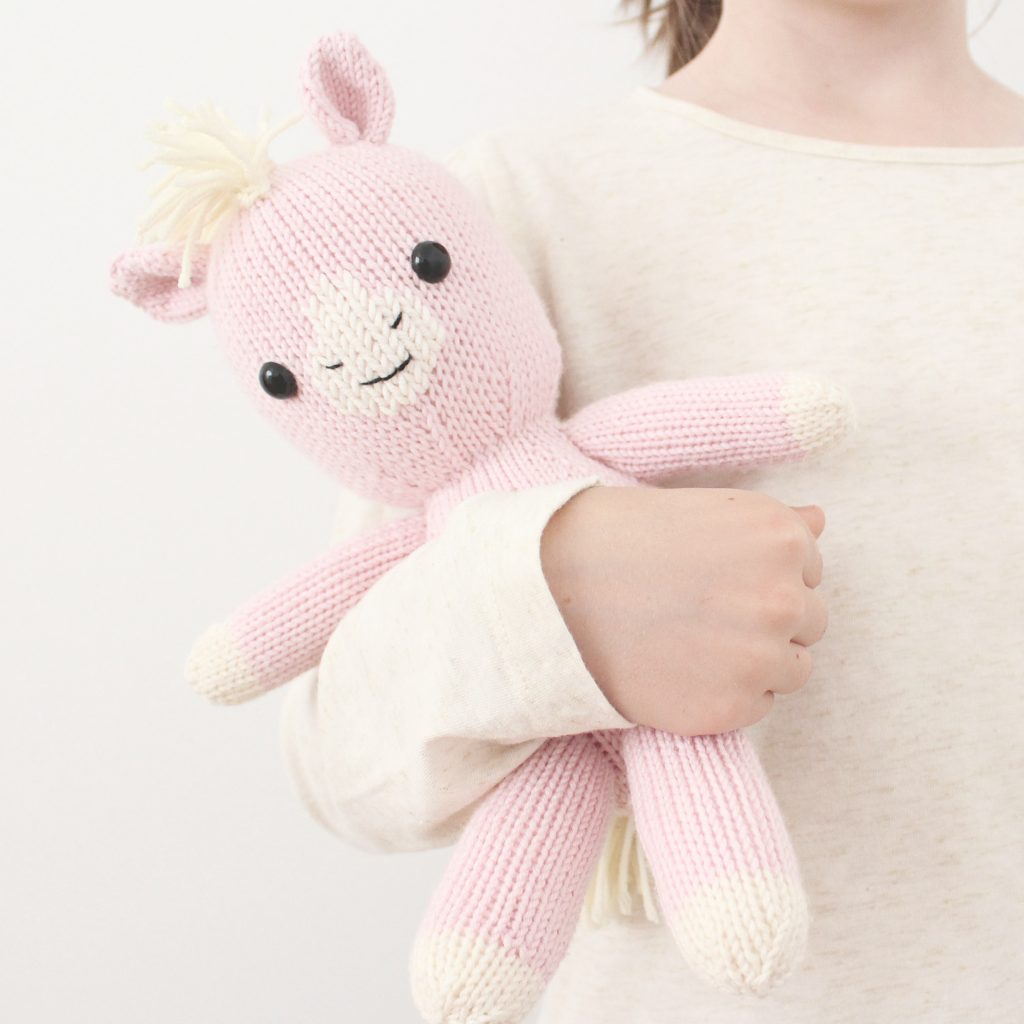 Subscribe to stay updated. Get 10% off in the Yarn Punk® Shop!